Miss E. Marie Oswald was a most dedicated, deeply musical, sound and inspiring teacher with whom I studied from about 1958-63. One went to her house, Cavenham in Brooklyn Road, a Victorian mansion enlivened by sky-blue paint on the interior woodwork. She lived there with her two sisters, one of whom used to work in Philpots in Guildford Road – a very old fashioned clothing shop which later became a bicycle emporium – together with their friend Miss K. Michell. They shared a liking for jigsaw puzzles and for the detective novels of Christie, Sayers, Marsh et al. Large collections were held of both. 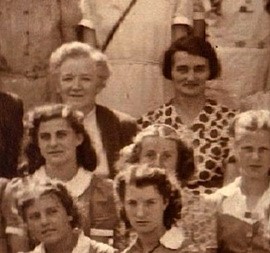 Miss Oswald (white hair) next to Miss Hicks in 1945

Miss Oswald was a keen gardener – like many of the old generation of big houses in Woking, Cavenham had a very large garden – and would spend many hours looking after the fruit and vegetables, wearing a very broad-brimmed straw hat with mint in the brim against the flies and knee-pads cut out of some old rubber mat. Her fruit cage was a most professionally organised institution.

She liked to sing and would either sing or demonstrate at the piano, which she did very beautifully despite a rare deformation of both thumbs which bent downwards from the first joint. A small table next the piano, covered in green baize, was used for writing notes on the lesson, and on it was a collection of pencils with large rubbers on the end and three pairs of spectacles: distance, reading, and piano; all had round brown frames. On one occasion she sang to me with great feeling from memory a considerable amount of Ravel’s song Trois beaux oiseaux du paradis, the French words entirely correct. I believe this was one of her favourite pieces of music.

She also inculcated a lifelong love of Bach and Beethoven, and a deep respect for the musical writings of Donald Tovey. It was characteristic of her generosity and honesty that when I reached the age of eleven she recommended that I apply to the Junior Department of the Royal College of Music as she felt I would receive a broader musical education there. This was a fruitful decision, as I obtained an Exhibition, later won a scholarship to the RCM as a full time student, and was a professor of piano there for twenty years.

I do know that at Woking Girls’ Grammar School before the war Marie Oswald used to institute performances of Gilbert and Sullivan operettas. The D’Oyly Carte organisation jealously guarded its orchestral material, which it refused to hire, so Miss Oswald would sit in the Savoy Theatre during performances pencilling the instrumentation into the piano score.

After her retirement from the Girls’ Grammar School in 1945 Miss Oswald was invited by Ruth Hicks, the headmistress of Greenfield School, to take a recorder class there (we walked to her house from school for the class). She also helped with the preparation of Greenfield School’s annual Nativity plays, presented in Christ Church, Woking.

I hope I have conveyed something of the respect and affection in which I still hold this remarkable lady and the great debt I consider that I owe her.

Woking Young Musicians Trust is very grateful to Simon Nicholls for the above. After studying at the Royal College of Music, Mr Nicholls taught at the Yehudi Menuhin School and then returned to the RCM as a Professor. He now teaches piano, accompaniment and song interpretation at the Birmingham Conservatoire.